The Cincinnati media keeps running this dorky drawing of the CAF streetcars we have ordered: 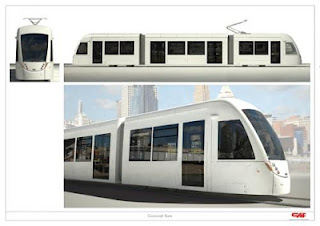 Here is high quality video of CAF streetcars very similar to the five that will start arriving in Cincinnati in late 2014:

The CAF streetcars are in concept similar to the Skoda vehicles in Portland, Seattle, Tacoma, and Washington, DC.  However Skoda is swamped with orders so we ordered from CAF, which is located in Zaragoza, Spain.

I've been to Zaragoza, if driving past it on the highway counts as having been there.  It's a city of about 700,000 located about halfway between Madrid and Barcelona.

Here is CAF's plant on the outskirts of Zaragoza:

And here is a crop of that same image -- you are looking at the roofs of new streetcars and light rail trains:

As should be obvious from these satellite images, CAF has a pretty big operation and manufacturing Cincinnati's streetcars on time shouldn't be a problem.  Unfortunately the Made-in-the-USA stipulation of the Federal grant awarded to Cincinnati means the streetcars must be assembled somewhere in the United States.  That somewhere is Elmira, NY, home of CAF USA.  The half-finished streetcars should be on their way across the Atlantic Ocean around this time next year and will arrive in Cincinnati for testing sometime in late 2014.

Posted by Jake Mecklenborg at 8:36 PM