When cocktail party conversation turns to MTV's The Grind, yours truly will be quick to mention the show's phony 1995 visit to King's Island. After weeks of radio ads, upon arrival it was revealed to be a bit of a scam -- it wasn't actually THE Grind, but rather the sale of the brand name to some sort of touring DJ outfit.  I remember there being some sort of set they built around the DJ stand, but I don't remember there being any MTV logo, there definitely weren't any video cameras, and certainly no yo-yo-yo this is Eric Neiss from The Grind.


Anyway, the event was completely horrible.  It was basically what you're about to see below, except on a concrete patio in the Waterworks section of the park, and substitute all these people for Kings High School students wearing Taz shirts and No Fear visors.  Skip ahead to 3:21 to catch a glimpse of the dude wearing the ski goggles (if you can stomach another minute, he reappears with a referee whistle):


The detail I do remember quite well from the night was trying to meet up with some Colerain girls using a King's Island pay phone -- calling them with the pay phone's number earlier in the day, then standing around said pay phone around 9pm for them to call back saying if they were coming or not.


Interestingly, this circa 1991 report on The Real World by Entertainment Tonight (the world's first reality show, and where The Grind's Eric Nies got his start) insinuates that the producers intentionally outfitted that apartment with only one telephone:


So in case you're wondering...I knew with that pay phone nonsense that I was setting myself up to look really dumb in front of my friends if the girls said they were coming but didn't show up. But by the mid-90s my prowess on Cincinnati's teen club dance floors was legend, and just minutes after they did in fact arrive and we took to the dance floor, they turned around a left were fighting all those swarming Kings High School girls for a piece.


Posted by Jake Mecklenborg at 11:50 AM No comments:

The internet's response to the Bunbury Festival has been a bit much -- any and all criticisms have been shouted down by a gang of hissing cobras.  And by criticisms I mean remarks by people (usually over 30 years old) pointing out the silly pretenses of such a festival -- one that borrows heavily from the multi-stage alternative festival model (even the title -- lollapalooza and bunbury function similarly in the context of alternative rock music festivals) pioneered by Perry Farrell.  Then, there has been a flippant attitude shown by the young (white) people toward Jane's Addiction -- with said young (white) people seemingly unaware of Farrell's role in inventing this type of festival back in 1991 AND the two incredible studio albums he recorded with Jane's Addiction in 1988 and 1990.

Wednesday I sat down with CityBeat at the Clifton Skyline, as is my weekly routine, and laid eyes upon this:

Finally somebody said what needed to be said about this sort of music festival and the prevailing musical activities of college-educated whites. To expand on Wilson's remarks, the Bunbury Festival existed as a backdrop for camera phone photos that could be posted like trophies on Facebook, then "liked" by a cascade of "friends".  It existed to give Cincinnati some semblance of indie cred for creative class recruits who waste their time caring about indie cred.  It was commodified culture, period.


But the even deeper issue which Wilson should have but didn't address directly is that music is almost always about economic class -- it either functions as an agent of the oppressor or as a heroic act of the oppressed.  Where it gets tricky is when the oppressor tricks the oppressed into thinking a particular song, performer, or genre is a declaration of defiance, and trickier still when the oppressed are tricked into playing oppressive music (but all that is the subject of some future post).


Let's turn the clock back for a moment to Woodstock, where 28 year-old Richie Havens concluded his festival-opening performance with this wonderful improvisation:


The next summer, Iggy Pop threw the peanut butter at Crosley Field:


Skip ahead to the 2000's and not a whole lot is happening for the white middle class.  Their music is neither a call to act out against their oppressors (who are as often themselves as the wealthy) nor a celebration of a modest life nobly lived.  Their primary activity is the advertisement of their accumulation of photos of themselves in social situations on Facebook.


And again we must revisit the matter of the music of Jane's Addiction.  Those first two studio albums are way, way up there in the rock pantheon.  No, not quite Dark Side of the Moon (heard of it, you Euro-DJ leg-humping hipster?), but Ritual de lo Habitual, especially, only missed that lofty perch by a hair.  It's everything that everything since about 2000 (including Jane's more recent albums) isn't.  It's The Real Thing -- a work that sought change in part through pursuit of a secular ecstatic state, that characteristic which artist Dan Graham discussed in his 1984 film Rock My Religion:

Hardly any of the new music that has appeared in the past 10 years has been any good, meaning most young people haven't seen a good live rock & roll band comprised of people their age. At Bunbury, there wasn't any band who was really pissed off, any band who was really celebrating life, or anyone who did anything outrageous. No assumptions were challenged and no minds were blown. But thanks to Woodstock, Lollapalooza, et al., those outcomes are insinuated in the marketing of today's music festivals, and of course it's there in all the "liked" Facebook camera phone photos generated on Cincinnati's riverfront this past weekend.

Minnesota Parties Hard on the 4th!

Today I had a connection in Minneapolis and saw these boaters out on one of Minnesota's many lakes. I was a bit jealous that I was stuck up in the airplane and not partying on that island! 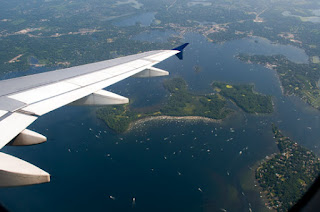 Here's a close-up of the action: 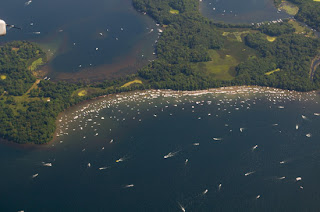 Posted by Jake Mecklenborg at 9:32 PM No comments: