Posted by Jake Mecklenborg at 10:23 AM No comments: Posted by Jake Mecklenborg at 9:10 PM No comments:

One-by-one people have been posting various King Records singles on Youtube, and it's one knock-out after another.


Sadly my story -- that of a Cincinnati native who didn't even know King Records existed until I moved elsewhere -- isn't an unusual one.  While living in Kansas City in 1996 I saw a DJ play nothing but King Records singles for two hours straight.


King Records recordings are now played regularly by the DJ's on medium-wattage WNKU, but otherwise they continue to wallow in obscurity, as does the King Records building itself.


Do yourself a favor and type "Cincinnati King Records" into the Youtube search bar and spend some time getting to know the seemingly endless number of killer tracks recorded 30 feet from I-71 in Evanston.
Posted by Jake Mecklenborg at 8:07 PM 4 comments:

Brent Spence "How to Survive a Bridge Collapse" Fear Campaign

The Brent Spence Bridge Rehabilitation/Replacement Project is totally out of control.

Listen to these crazy radio ads sponsored by a union pushing the Brent Spence Bridge project:
"America's Bridges Falling Down"
"Russian Roulette/How Many Will Die?"

There is no need for the Texas-sized bridge project as currently proposed and there is no way to fund its construction cost entirely with Ohio and Kentucky state gasoline tax revenue. In order to get it built, some combination of a federal earmark and tolls will be necessary.

Recently some area residents received this outrageous mailer from a labor union: 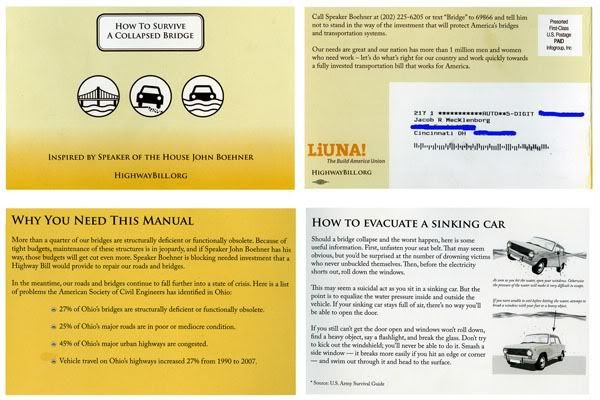 [Click Here for a larger version of this graphic]

How to survive an up-close & personal with the Ohio River if the Brent Spence Bridge collapses as you cross: 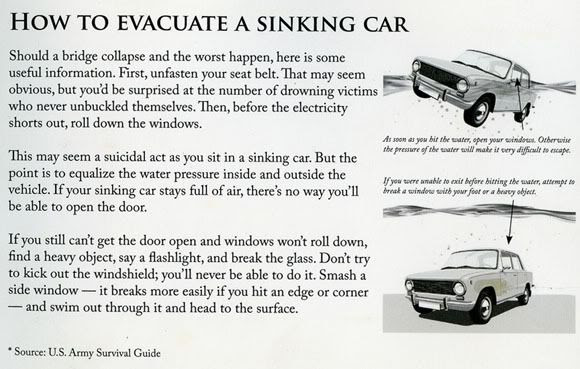 So what, exactly, is going on?

The Democrats, as should be expected, are looking to ensure that the unions who back their campaigns are awarded bridge construction contracts. But I bet this desperate ad campaig years before construction commences is a response to the anticipated Republican strategy -- to carry out this enormous project under the auspices of a private-public partnership.

If a private company builds the new bridge, they might be able to avoid high-priced union wages, meaning our "bridge collapse" union friends will have to move back into mom's basement and watch construction on the project's official web cam. The public will be dazzled by the capital savings promised by the Republicans, and probably won't be able to figure out that by avoiding the standard bidding processes, construction contracts will be awarded to Gov. Kasich's cronies.

But it gets a lot more interesting when the matter of toll revenue is considered. In the case of state turnpikes (not interstates), toll revenue first repaid construction bonds and is now mostly used to pay maintenance costs. In those cases where excess turnpike or bridge tolls are used to fund other items in the state budget, they might be abused, but they certainly are not paid as dividends to shareholders.

But if a private company builds the new Brent Spence, excess toll revenue WILL be paid out to shareholders. So if everything works out like they say it will and the use of non-union labor saves Ohio and Kentucky, say, $100 million in construction costs, over the ensuing 30+ years much more than $100 million that would have been returned to state coffers will instead go into the pockets of Kasich's cronies.

Let's take this one step even further -- no doubt, written into any private-public agreement, "THE COMPANY" will have the right to deny any future company from entering into a similar private-public agreement at a nearby river crossing that needs replacement or other improvements. This might mean that the privately-held new Brent Spence -- and only the Brence Spence -- will be improved, funneling an increasing share of cross-river traffic through its toll gates. The agreement might go so far as to prohibit any competition from public transportation, meaning no rail transit link will ever be built between Kentucky and Ohio.

So with all these unknowns, maybe the labor union and its fear campaign is the lesser of two evils.