That's right, it's 2011 and the only interesting records coming out are by the same people who were making the most interesting records 40 years ago. The two are scheduled to be released within hours of each other on October 31 and November 1.
Lou Reed/Metallica: Lulu
I'm trying to keep an open mind with this one, but I fear the worst. The leaked track on Youtube doesn't sound too promising:
What was Lou Reed's loudest song before getting together with Metallica? Probably Kill Your Sons, off 1974's Sally Can't Dance:
Folks, that is one helleva song, off one of the best albums ever. I mean, listen to some of what else is on that album:
Just listen to how that piano, electric piano, and hammond enter and leave. And structurally it's the opposite of Reed's familiar silly-song-turns-serious formula (Coney Island Baby, She's My Best Friend, etc.). He flips it, with the nagging roommate in the outro letting you know this song really was just about an annoying roommate!
The Beach Boys "Smile" (1967/2011)
Well, it's almost here. I admit that I was one of those people who spent a lot of time on the internet ten years ago reading and speculating about this album, then ran out to the record store the day the re-recorded Smile was released in 2004. But that album was frustrating because the instrumentation and certainly the vocals were no match for the original Beach Boys. One could hear the inferiority from the first second of Our Prayer to the frumpy re-record of Good Vibrations.
My opinion of Brian Wilson was unfortunately marred by seeing him perform Pet Sounds live in 2002 in Boston. He was painful to watch, his singing was way off, and his band was of course technically competent but didn't sound good. Apparently he got an entirely new band and started eating his vegetables by 2004, when this impressive performance was taped:
I'm definitely looking forward to the originally recorded version of Heroes & Villains (not the low-fi version from Smiley Smile), which should be outstanding, and of course Mrs. O'Leary's Cow, which won the 2005 Grammy for Best Instrumental, but sounded clinical (and digital!) compared to what I'm hoping for with the original 1967 recording:
It's a miracle that this record is finally being released under the auspices of the guy who wrote the songs and engineered the recording sessions. Get this record and listen to it on a real stereo, not your stupid computer!
Posted by Jake Mecklenborg at 8:07 PM 1 comment:

Each day, The Cincinnati Enquirer astonishes us with its anti-intellectualism. It is dedicated to perpetuating folksy myths for the benefit of our city's nastier controllers of wealth. Its non-stop harassment of Cincinnati's long-planned modern streetcar project -- peppered with all sorts of libelous episodes -- reached a new low on Sunday, October 16:

This graphic is such a stunner that it needs little commentary (Click Here for a larger version), but it should be pointed out that the train the couple is riding on is NOT a modern streetcar, it's a light rail train. What's more, it's a circa 1990 first generation light rail train of the sort in operation in St. Louis and Baltimore:
Technology has advanced, meaning these boxy type of light rail trains with mixed hi-low cars will never again be manufactured. The Enquirer, of course, did not bother in its half dozen published graphics to include an image of a modern streetcar, such as the one that was displayed on Fountain Square last year at this time:
Instead, they ran this photo of a 1930s-era PCC streetcar:

But look closely: they credited this 60-80 year-old photo to Joseph Fuqua II, the Enquirer photographer who is about 35-40 years old. This hints that one of his photos of the modern streetcar that visited Cincinnati last year was switched out by a bought-and-paid for editor.
Posted by Jake Mecklenborg at 12:53 PM 4 comments:

Hey Cincinnati Media: Every Bridge and Tunnel in NYC is "Functionally Obsolete" 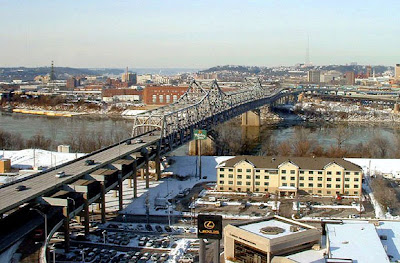 It stands to reason that Cincinnati should adopt a transportation strategy that mimics that of the world's most important city. But that wish seems impossible in a town where the local media can't execute a Google search.
The Brent Spence Bridge, the object of recent national media attention, is classified as "Functionally Obsolete". This term has been abused by Bill Cunningham, Barack Obama, and everyone in between.
An effortless Google search for "Functionally Obsolete Bridge Definition" directs us to this passage from ODOT's website:

"A functionally obsolete bridge is one that was built to standards that are not used today. These bridges are not automatically rated as structurally deficient, nor are they inherently unsafe. Functionally obsolete bridges are those that do not have adequate lane widths, shoulder widths, or vertical clearances to serve current traffic demand, or those that may be occasionally flooded.

A functionally obsolete bridge is similar to an older house. A house built in 1950 might be perfectly acceptable to live in, but it does not meet all of today’s building codes. Yet, when it comes time to consider upgrading that house or making improvements, the owner must look at ways to bring the structure up to current standards.

A bridge sufficiency rating includes a multitude of factors: inspection results of the structural condition of the bridge, traffic volumes, number of lanes, road widths, clearances, and importance for national security and public use, to name just a few.

The sufficiency rating is calculated per a formula defined in Federal Highway Administration’s Recording and Coding Guide for the Structure Inventory and Appraisal of the Nation’s Bridges. This rating is indicative of a bridge’s sufficiency to remain in service. The formula places 55 percent value on the structural condition of the bridge, 30 percent on its serviceability and obsolescence, and 15 percent on its essentiality to public use.

The point calculation is based on a 0-100 scale and it compares the existing bridge to a new bridge designed to current engineering standards.

The bridge’s sufficiency rating provides an overall measure of the bridge’s condition and is used to determine eligibility for federal funds. Bridges are considered structurally deficient if significant load carrying elements are found to be in poor condition due to deterioration or the adequacy of the waterway opening provided by the bridge is determined to be extremely insufficient to point of causing intolerable traffic interruptions.

Every bridge constructed goes through a natural deterioration or aging process, although each bridge is unique in the way it ages.

To be eligible for federal aid the following is necessary (a local match is required):

Again, those definitions are from ODOT's web glossary of bridge terminology, which appears to have been uploaded upwards of ten years ago and has been available this entire time to anyone writing a story involving the Brent Spence Bridge. So what's happening here is the media is being tricked by the highway lobby into tricking Cincinnatians into thinking the bridge is exceptionally dangerous and in an exceptional state of disrepair. Perhaps three more people will be killed, per decade, on an interstate highway bridge with no emergency shoulders versus one with shoulders. Meanwhile, in that same amount of time, dozens if not hundreds of Cincinnatians will be killed falling in the shower.
Up in New York City, every single vehicular link between Manhattan, New Jersey, The Bronx, Queens, and Brooklyn is functionally obsolete. None of these bridges or tunnels have breakdown lanes, and there are no plans to replace any of them:
The Brooklyn Bridge:
The Manhattan Bridge:
The Williamsburg Bridge:
The Queensboro Bridge:
The George Washington Bridge:
The Holland Tunnel:
The Lincoln Tunnel:
The Queens-Midtown Tunnel:
The Brooklyn-Battery Tunnel:
Instead of worrying about its "crumbling, outdated, obsolete, etc." bridges and tunnels, billions are being spent on major mass transit capital improvements:
So since 2007, when Cincinnati City Council first allocated funds to the Cincinnati Streetcar, the local media has attacked the relatively small project on a nearly daily basis. Meanwhile, during that same time period, New York City has spent billions digging new subway and commuter rail tunnels that have attracted no organized opposition. And nobody who writes or reads The Cincinnati Enquirer can figure out why the young people -- all of whom can execute a Google search -- want to leave if they haven't already.
Posted by Jake Mecklenborg at 5:52 PM No comments:

Nobody Showed Up to the Oct 3 COAST Fundraiser!

COAST, the nasty anti-tax, anti-facts organization that concocted 2009's Issue 9, is attempting to block all rail public transportation in Cincinnati again. 2011's Issue 48 will block planning and construction of ALL RAIL TRANSIT in Cincinnati until 2020 -- no American city has ever voted itself into such a corner, and Cincinnatians will not this November.
But COAST's outrageous activities have received HUNDREDS OF HOURS of free promotional time on local talk radio over the past few years, and they keep having their legs humped by Eric Deters, Doc Thompson, Brian Thomas and the other shills who make a living tricking former high school athletes and the little old ladies who bore them. If not for these three or four assholes (and whatever mysterious entity funds them), Cincinnati would enjoy a much more civil public discourse. Oh -- and the long-planned streetcar would be under construction as we speak.
On Monday Oct 3, COAST staged a fundraiser at Mecklenburg Gardens. Whereas a NO ON 9 Cincinnatians for Progress event in 2009 drew hundreds to that very same restaurant, tonight's COAST pro-Issue 48 event attracted maybe 25 people. That's being kind -- I'm counting about 15 heads in this photo:

But you guessed it -- TV COVERED THIS NON-EVENT!

Any COAST event, no matter how small, is always accompanied by exotic vehicles:

No sign of any elected officials or anyone seeking office (like, say, Chris Smitherman). This event was a TOTAL BUST and indicative of just how feeble an organization COAST is. But no doubt the butt sniffing and leg humping will continue straight through the election, and deep into the 21st century.
Posted by Jake Mecklenborg at 6:22 PM 3 comments: